At Allsafe Auto Locksmiths we are BMW Car Key specialists up to about 2012, if you have lost the keys to your BMW, or simply just need a spare key, we can provide roadside service and get you a remote key sorted the same day. Give us a call for a quote.

If you having issues with your current BMW keys, scroll to the bottom of the page to see Common BMW Car key issues. If its not there, call us and explain the problem, we may be able to help!

Locked out of your BMW?

Have you locked your keys inside your BMW? Count on Allsafe Auto Locksmiths to get you back in quickly, effectively and damage-free. We do this by picking the lock on the vehicle, you won't even know we've been there once we've finished. Call us today!

If your model is not here, call us anyway as we may still be able to help.

Here are the remotes that are used on BMW Vehicles, we try to keep all of these remotes in stock, so we can provide you with sameday service, we can supply and program any if the remotes listed in the South Wales area, wherever and whenever it's best for you, contact us for a quote. 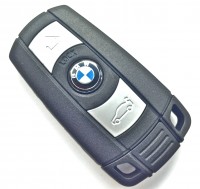 Occasionally BMW diamond shape remotes can fail, meaning the car will not even turn over. If this happens the best option is a total key replacement, contact us for a quote if you are having this issue. Please be aware there could be 1001 reasons why your car is not starting, and we cannot confirm the key is the issue over the phone, and will need to run diagnostics on the vehicle before replacing. 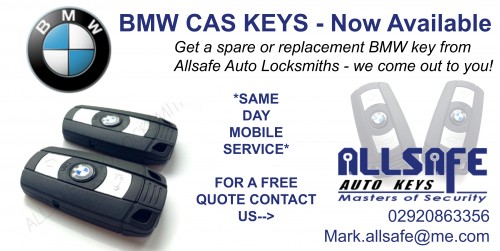