Get a Renault key card with us today.

Renault have used key cards on many of their models, including the Scenic, Megane, Espace, Laguna, Clio and Vel Satis. There are a few different types of cards, which are listed below.

If you have lost your card, need a spare or your card is broken, we can replace it, we keep all Renault Cards in stock, if you'd like one, give us a call. We Guarantee to be cheaper and quicker than the main dealer, we come out to you. 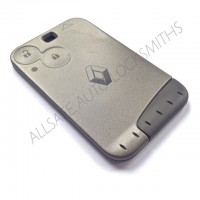 Used on the following vehicles 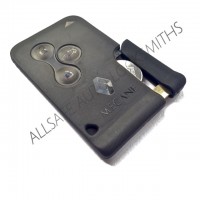 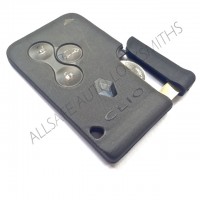 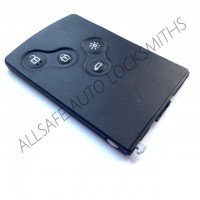 We have attended many Renault's with the message "CARD NOT DETECTED" on the screen, why not? the card is in the slot?.. Due to the slim build of these cards, they are quite flexible, the wear and tear that they go through daily will eventually damage the key internally, meaning when you put the card into the reader, you get that dreaded message.

Wear and tear is also known to stop the remote working, therefore you have to use the override key to gain entry via the passenger side.

If you have suffered with either of these problems, look no further, we can come out to you, and replace your card on site and get you back on your way. Don't get your car recovered when you don't need to, we can save you a lot of money, call us first.